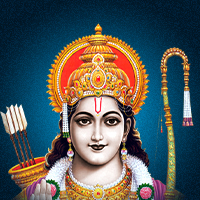 Rama or Ram  also known as Ramachandra, is a major deity of Hinduism. He is the seventh avatar of the god Vishnu, one of his most popular incarnations along with Krishna and Gautama Buddha.In Rama-centric traditions of Hinduism, he is considered the Supreme Being.

Rama was born to Kaushalya and Dasharatha in Ayodhya, the ruler of the Kingdom of Kosala. His siblings included Lakshmana, Bharata, and Shatrughna. He married Sita. Though born in a royal family, their life is described in the Hindu texts as one challenged by unexpected changes such as an exile into impoverished and difficult circumstances, ethical questions and moral dilemmas. Of all their travails, the most notable is the kidnapping of Sita by demon-king Ravana, followed by the determined and epic efforts of Rama and Lakshmana to gain her freedom and destroy the evil Ravana against great odds. The entire life story of Rama, Sita and their companions allegorically discusses duties, rights and social responsibilities of an individual. It illustrates dharma and dharmic living through model characters.