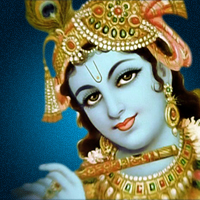 Krishna is also known by numerous names, such as Govinda, Mukunda, Madhusudhana, Vasudeva, and Makhan chor. The anecdotes and narratives of Krishna's life are generally titled as Krishna Leela. He is a central character in the Mahabharata, the Bhagavata Purana and the Bhagavad Gita, and is mentioned in many Hindu philosophical, theological, and mythological texts. They portray him in various perspectives: a god-child, a prankster, a model lover, a divine hero, and as the universal supreme being. His iconography reflects these legends, and shows him in different stages of his life, such as an infant eating butter, a young boy playing a flute, a young man with Radha or surrounded by women devotees, or a friendly charioteer giving counsel to Arjuna.Yaar Ki Marji Ke Aage Bhajan By Shri Vinod Ji Agarwal - BK Dutt Colony, New Delhi

This is a recording of bhajan sandhya .In 1962, at the age of 7 years Shri Vinod Agarwal ji  came to Mumbai when his parents migrated from Delhi. His parents were believers of lord Krishna.
At the age of 12 years he learned to play Harmonium. He is studied upto Higher Secondary. He has been interested in God & Bhajans since a very young age.